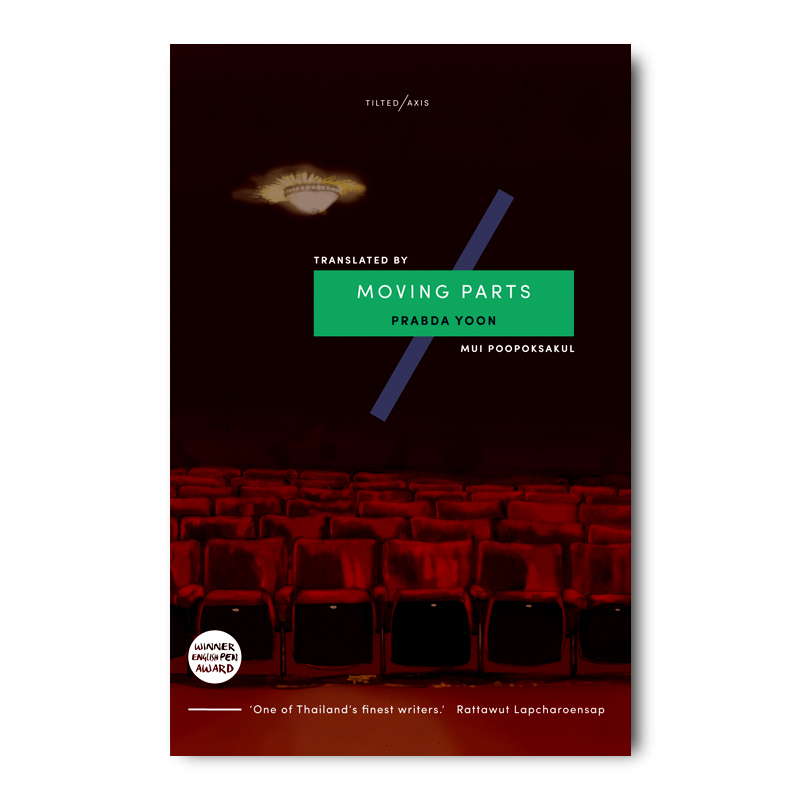 After having been translated and published in English for the first time in 2017 with The Sad Part Was, I didn’t expect to have another book in English out so soon. But here it is!

Moving Parts is, once again, a short story collection from the early period of my writing life (the Thai edition, “ส่วนที่เคลื่อนไหว”, came out just a year or so after most of the stories in The Sad Part Was, which was around 2001), once again translated by Mui Poopuksakul and published by Tilted Axis Press.

Moving Parts came out in the UK on September 6th, and I was fortunate enough to have been able to travel to London for a cozy launch/talk together with Mui at Libreria Bookshop on that very day. The next day we took the train to Bristol for another good talk at Foyles. I was very excited and nervous at both events, even though we had gone through similar experiences with The Sad Part Was just a little over a year ago.

Moving Parts is a collection of unrelated 11 stories, each dealing with a “body part,” although the “parts” in some of the stories aren’t exactly real. All 11 stories were first published serially in a Thai magazine called LIPS, then as a paperback by the magazine’s publishing imprint Guy Marut Press. In Thailand, the collection has gone through 4 reprints to date. The latest edition is by Typhoon Books.

Asymptote, “the premier site for world literature in translation,” chose Moving Parts for their September Book Club Selection. The announcement was accompanied by Lindsay Semel’s generous review of the book. There is also a very nice interview with Mui Poopuksakul about translating the book and translating Thai literature in general on the site.

“Yoon’s masterful stories unfold the drama of modern life, with all the stylistic resonances of the miraculous.” Eka Kurniawan